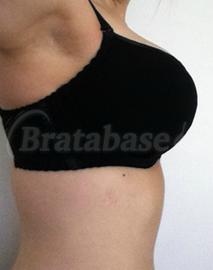 Yess, it fits! I have this in 70G, too, but it’s waaay too large in the band (despite my alteration) and just a tad too small in the cups, so I ordered it in 65H.

I was afraid a 65H would be too large in the cups, as the 70G wasn’t ridiculously small, but luckily it’s not bad! For the part of my larger boob the cup is just fine, but for my smaller maybe just the tiniest bit too large. That, however, I can correct with the pad, so no problem there. The wires are wider than I would need, but I don’t get any wrinkles and it isn’t uncomfortable, so I don’t see it a problem.

The band is snug enough! And it has three hooks! So two mega pluses for me. I started wearing it on the loosest hooks and that feels fine. It has a whole four rows, so hopefully it won’t wind up too big in the too near future.

The shape is really nice, not as projected as the 70G, but a bit more rounded and ‘gathered together’, and it also feels more supportive than the 70G.

The removable straps are a great idea, but the comfort straps have a weird issue: they slip right off! The ‘hook’ is somewhat wider than in the 70G comfort straps, so I tried the 70G straps, and luckily they stick like glue. So basically no problem for me, as I had one pair of extra straps. Still a shame since I’ve shortened the ones I had and planned using the new ones as racerback straps, but obviously that won’t work since the straps refuse to stay attached to the cups.

I like the details (buttons at the front), and I also ordered the matching briefs. The set is simple and stylish, I like https://d28qt14g3opchh.cloudfront.net/smileys/icon_smile.gif" alt=":)" />