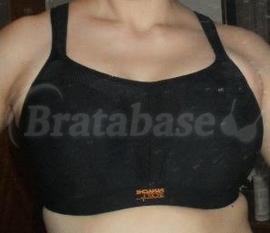 "What's good about this bra?"

Well, first of all, and most importantly – it supports!

The sizing runs quite large both in the cup and the band, so if you're between sizes, I recommend sizing down, or even beyond that. I first tried it in 70G, which already is smaller than the 70GG that mostly I use in Ewa Michalak. But even if the cup was fairly okay, it was way too big in the band and offered zero support.

The 65G (i.e. one size smaller both in the band and cup), on the other hand, is pretty much perfect! It passed my bounce and wiggle test with flying colours. I'll give you an update tomorrow after putting it through the ultimate test: horseback riding.

The band is okay, snug enough, although I can fasten it in the second hooks without it being too uncomfortable. Thus I might have to narrow it down in the future, but that's not anytime too soon, I hope. The cup might be just a tad too small for me (especially my right breast), but if that's the price for decent support, I'm definitely willing to pay!

The straps are wide and comfortable, but a bit too long for me – I always have to shorten the straps if they're not fully adjustable... But when the straps are fastened to an X with the extra hook between the shoulder blades, they're okay, and the support is even better.

As if it wasn't enough that there exists a sports bra in this universe that actually fits and supports even my size, the shape this bra gives is very nice! Not at all sports-bra-ey.

Edit: Now it's been tested in horseback riding, and I can confirm it works. Or at least I didn't notice any disturbing bouncing – of course my focus isn't on my boobs when I'm riding (and I'm wearing winter clothes), but if it were too bouncy, I think I'd feel it. So far, still so good!