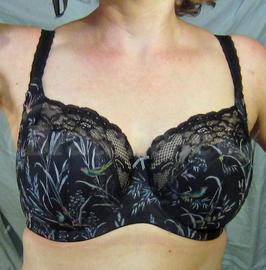 I mention on the review for the 30HH version of this that I initially thought the Jasmine ran small in the cups. That's because the band is so tight that it stretches the underwires wider than it should, pulling the cups too tightly in the front and making them appear smaller than they are. With an extender, the cups fit as they should. Note that the photos are of the both sizes without the extender, so the cups don't fit as nicely as they do with one. I'll likely order the new color of the Jasmine in a 32GG.

The gore is one of the narrowest of the full cup Panache bras I've encountered, and the underwires don't come up as high. The shape is nicely round and mostly invisible under shirts.

As mentioned above, the band runs tight, as well as quite firm. If between band sizes, round up.

I've just begun to break in this bra, but I think it may become a favorite for my wide, close-set bust. I will say that it feels slightly snug, but it looks as if it's a great fit, so I'm hoping it just needs to be broken in.

Center gore comfort:
Underwires dig into sternum, because they are too high
Top of the cup:
Cuts into breast tissue (quad boob effect)
Band fit:
I can fasten it, but it feels too tight

Strap separation:
Not a problem
Band fit:
I can fasten it, but it feels too tight