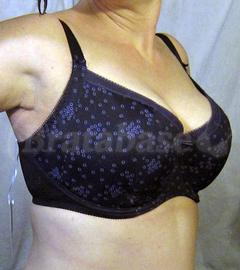 EDIT: After breaking this bra in, it's my favorite. The cup is shallow, but it's the only bra I own that doesn't have a gore so high that it gouges my in the cleavage, so I'll live with the shallowness. I do wish it came in a 30HH (I'm trying to wear it on the loosest hooks for as long as possible, but I would really prefer it to be tighter).

EDIT EDIT: I bent the underwire as per Bras I Hate, and the fit at the bottom of the cup is now just about perfect -it almost eliminated the shallowness problem.

I have three problems with my bras -

-in my size, the underwire width often stretches the cups to be more shallow than is necessary, forcing the wire to sit an inch below the crease of my breast

-the gores are all too high and typically too wide

-the bras that don't have high gores almost always only have two hooks, which I don't think are sufficient to support GG+ cups.


The band is quite firm for a Freya, and the underwires are VERY wide - wider than I need, but I a size down would be too shallow to consider.

I had hoped this bra would solve all of my issues; it didn't. But it pretty, it looks nice under a T, and it's fairly comfortable - much more so than the Jasmine I've been wearing.