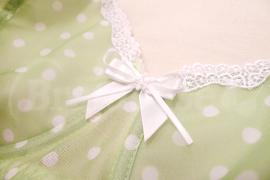 Quality: 4/5
Comfort: 4/5 (minus one for when I have to tuck my boobs back into the cups)
Appearance: 4/5 (kinda jumping out/quadraboob-ish.. will update after full day's wear)

Patsy is a stunning little green bra with white polka dots. Color is very light almost minty but still crisp where the green overlays a white layer underneath like the cups and straps. The fit is identical to my first and second Freya Padded Half Cups: Monet (http://bra.pe/RIR/) and Lauren (http://bra.pe/RSL/). Keisha's cups (http://bra.pe/RN1/) fells shorter and were much less successful. Typically, the band is "Freya-long" and so I have to start it on the 2nd hook although I could do it on the final one but I'd like to have it a bit longer so I'll make due.

It seems that these half cup styles are a bit difficult for me and there's a bit of a learning curve (pun intended!) atop the cup. If I adjust and stand still I can fit well into the cup and there's a natural curve continuation from the top cup edge. It's super comfy and although the gore sits just about 1cm away from my chest and I have to pop my nips back in every now and then I have to say this is a worthwhile purchase. Isn't that really the cost of wanting Freya's stretchy 30-band and only up to G-cup Half Cup bras? Seriously though, it wears the same as my Monets and Lauren. I am very happy to see so many patterns available in this style although ideally I'd love to see the range rise above a G+.

This was my most anticipated bra of the season and I hope it will last at least throughout the summer.