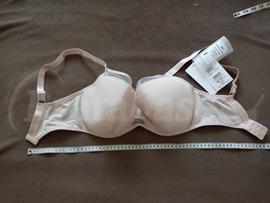 This fits according to my standard which is *a very tight band* - you can see how much the band is straining, but it feels so good to have a band this tight! I have no problem wearing a band this tight - I'm probably in the minority in this, but my boobs are really supported. This is my first Kinga bra; I believe I looked at the data on bratabase before ordering. Though now I look at the size chart on Kinga's webpage, https://www.kinga.com.pl/tabela-rozmiarow, they would've put me in a completely different band with my measurements. I got this off the website MoreTights.com for $35.13 cad + $13.78 shipping.

I would mark this as a "Fit" in bratabase, but I don't want to mess up the data b/c most people with my measurements probably wouldn't want a band this tight? Idk.

The positives: this bra is very interesting. It's my first semi-soft, but you know what? I would consider this a padded bra! It's *mostly* padded. I want to compare this to a Comexim padded plunge (even though I'm sure Kinga's Etna II is *not* trying to be like a Comexim PP!) Kinga's Etna II doesn't have as much immediate projection as Comexim's padded plunge (at least I pulled out my Comexim Charm PP and compared the cups on both), so my boobs get pushed up more. Despite this, I still think the bra's comfortable, it's just *my boobs are higher* If you already have a high root attachment, this probably isn't a good bra for you - it's just going to push your boobs up more.

The regular Etna is a soft bra, and was reviewed on Stanikomania https://stanikomania.pl/spokoj-etny-recenzja-biustonosza-kinga-etna/ Etna (soft bra) is similar in aesthetics to Etna II, except Etna II is padded; the bottom part of the cup is only in 2-parts - which you would think would be way too shallow for me, but for some reason it's not (it's sorcery?) and I'm able to make it work, but YMMV. Also, I think this is the best cup size for me, but if you look carefully, it's prob a tad too big on the right side (my smaller side) and a tad too small on my left side (larger side), but c'est la vie, this is the best cup size for me in the middle for a padded bra. There's probably one finger of empty space at the bottom of the cups, but it's not a deal-breaker. Can't wait to try this bra out for a full day - I've just washed it - but I've already worn it for 6 hours today, no problemos.

The negatives: I honestly can't think of any. Like *any* bra, your success with this particular bra will depend on breast shape, a.k.a. it will not work for everyone. I also don't have any other Kinga bras to compare this to. I read (I believe on a bra blog) that Kinga is trying to go more luxury.

Edit: Bra strap length is pretty good on this bra (for those of you with lower set breasts, or people who are tall), I had to take the bra off and adjust the straps shorter, and I'm a pretty tall person (well, 5'7 so a bit taller than average).