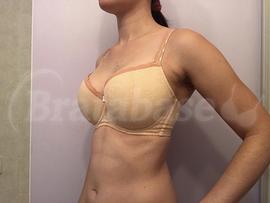 Alrighty folks, I think I can finally review this bra (and matching briefs) after having had the opportunity to wear it a couple times. My apologies for taking forever to review! I moved at the end of February, so I was pretty busy, and of course it's quite the adjustment to get settled in a new place (and living with a partner for the first time too!).

First of all, I love the look of this bra. The lace appears a bit more peachy coloured to me than in the stock photos on the website, and this is complemented by a beautiful mauve lace trim along the top edge of the cup and the front of the straps. It's a two-seamed, three part halfcup, with 3x3 hooks and eyes.

As for the fit, it pretty much fits! I ordered the 55K with wires from 55J, 1cm depth added near the wire, straps moved in 1cm, and gore overlapping. Honestly, it's hard to say which of these were completed, except the wire swap, which is clearly the same width and length as the other 55J wires. The gore does seem to be overlapped as well, but that one I was less concerned about. The gore is slightly taller than the standard plunge, and the cups have decent coverage. They're perhaps a little tall, but it works for my shape. My main concern was the cup width and depth near the wire, and those are both acceptable for me. I don't think there's quite enough room for my breasts to settle completely to the bottom, but it's not uncomfortable and doesn't crease the cup for me. My only other experience with a Comexim 3HC was when I tried one on in person at the now-defunct Bra Obsessed in St. Thomas, Ontario, and I remember it being both too small and far too shallow for me, so I was quite nervous about trying another one, but I'm a sucker for sweet, light-coloured halfcups (my first downfall was the 60FF - Ewa Michalak » Chp Marcepanowa Magnolia (694) ), and luckily this turned out well enough for me. My only other qualm is that the band is quite small and snug. It really feels like I'm strapped in when I close the band, and if I wear it for too long while sitting, it really starts to dig in along the bottom of the band and the wires. I hope it will eventually relax a little bit, but for now it's tolerable for up to a few hours at a time.

It gives me quite a different shape than the Comexim plunges which I find to be very uplifting and give me a very slight peaked appearance. The halfcup is still uplifting, but it's much more rounded, and gives a more minimized appearance. It also makes my chest look slightly wider from the front than the plunge silhouette.

Lastly, I took a gamble and ordered the Elise briefs, and I'm thrilled to report that they work for me! They're full-coverage, low-rise briefs, made with sheer mesh at the back. (I have lots more photos on the full review page!). The Small was once again the correct size choice for me, despite the fullness of my bum.

Overall, I'm pretty happy with this set! I hope this will help some folks out there who are considering it.