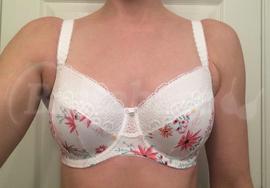 My shape is low set, short and narrow rooted, and soft.

This bra is the second Florri I've tried. I previously tried the 28FF - Freya » Florri Padded Half Cup Bra (3103) , and had some quadding, so I decided to try the 28G. I ordered it through Belle Lingerie via ebay because it was a couple dollars cheaper through ebay.

I marked this bra as fitting even though the bottom of the cup is a bit shallow at the wire, the cups are a touch wide, the wings are a bit too short, and the band is stretchy for a 28". It's called a half cup, but it's really cut like a balconnette. The shape is more natural than a half cup also, and it's more full coverage on the upper half of the boobs. I had to really hike it up because the bra wanted to sit a bit lower due to the shallowness at the wire. Originally I had some noticeable quadding, but once I hiked it up, it was better. I think the shallowness will "loosen up" after a couple wears and I won't notice it so much (as least that's what I'm hoping!).

It's very comfortable though, and the straps are extra wide, so they feel nice and supportive. The straps adjust long enough for my tall frame, and they look like they could adjust quite short also. There is a pattern on the straps that is pretty. The bra itself has a sort of satiny feel that will work well under cotton tops (no tenting). The band is stretchy, like I said, and it has 3 x 2 set of hooks. The hooks are spaced widely, so hooking an extender onto them might be a bit tricky, since most extenders have hooks closer together. The gore is quite wide, so if you're close set, this bra won't work for you. Again, I ordered a patterned bra, which is unlike me, but it's pretty and reminds me of summer with it's flower patterns.

Overall the quality feels really good, the comfort is excellent and the appearance is pretty good also.