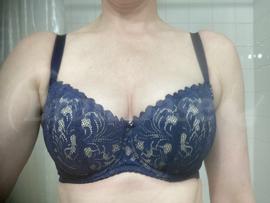 This bra's measurements have been altered
Made as 3HC, straps moved in 1cm, cups reduced 1cm

I kept on seeing this beauty on other people, and my jealousy and envy would just come out! I finally decided to order my own, and when I went to order it...it was gone on the website! Noooooooo. I was so heartbroken, but I emailed Joanna and asked her if there was any way she could make one for me, and she agreed. I'm so so happy to have my own now!

My shape is soft, low set, narrow/short rooted. This bra lifts up my tissue, making it look like I'm fuller on the upper half than I really am. It measures exactly the same as my other new bra - Comexim Basic Half Cup that I just ordered in 65J. I also asked for overlapping gore, cups reduced 1cm, and straps moved in 1cm. I believe they were done. This bra doesn't have the cup lining along the edge like the basic, so I almost felt like I'd have gaping, but it seems to fit nicely too. It has that scalloped edging that looks pretty but it hard to fit right (for me).

The straps adjust fully and the band is just slightly under 30" - which means it should stretch to a 30" with a few wears. I've been wearing extra long bands lately, becuase I've had this weird new sensory issue with tight bands. Most of my bands have been 32-34" the last few months, so 30" will feel tight enough for now!

I think the aesthetic of this bra is so pretty. Navy lace with a beige background. It's quite sophisticated and sexy I think. The gore charm is a little C with a tiny fake diamond. Its cute without standing out.

Again, like the basic in 65J, this bra has 3 sets of hooks and wider straps, which make for better support.

I'm glad I finally just admitted that I needed the 65Js, because my other bras have so much bubbling. I've gained a few pounds over the last year also, so 65HH was not just bubbling anymore but just plainly too small.