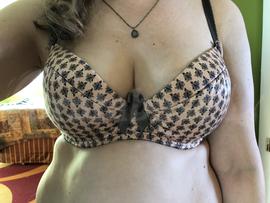 This bra's measurements have been altered
Sophisticate Balconette has straps moved in, reduced cups, reduced gore - all 2cm I think

I recently got a 65J Belen 3HC which is beautiful, but not a perfect fit. While the bra band was a bit snug, the cups did fit, but were a little bit too tall for my functionally short roots. So Wilderness1 was super kind and generous to offered to send me a bunch of her altered Comexims to try. Looking at the list, some looked like they were going to be too small, and some looked like they had similar enough measurements and alterations, so I narrowed it down to 4 bras, including this one. It’s an Anna Pardal bra, but they were made by Comexim, so I consider it Comexim. The 70HH Beauty that I recently reviewed was one of the two I had the option to buy. I didn’t but the Beauty, but I did buy this one even though it’s not a completely perfect fit.

In my Comexim sizing journey, I tried a 30G/65HH Jade Plunge from Sonya , and while it looked amazing on, and it was generally a good fit, I opted not to take it from her because the cups were a bit too tall (sensing a theme here?), and the straps were a little bit wider than I am comfortable with. The band was tight, but it was a 3 hook set though I was ok with a row of hooks from an extender which did not affect the cup fit significantly. So seeing as this one (Lady Grey) was a sister size with alterations, I knew I had to try it, but I was worried about it being small as a result because I have always been told that reduced cups make the cups fit smaller and the volume of the Jade was pretty good already. I must say that when I took the pictures, I was days away from my period, and somewhat swollen, so yeah, I am spilling out of the cups a little bit (mostly on my larger side). Now I’m a few days in, it’s mostly my center fullness that is spilling. I would actually say that this bra, with the sophisticate balconette alterations, fits almost exactly like my 65FF Ewa Michalak PL Milady (which I do have a little spilling near the gore).

When it comes to the band, it’s slightly difficult to gage whether or not the 65 or 70 is better. It’s used to me, was used to Wilderness1, possibly even more Users before that. While I am comfortable on the middle set of hooks, I do think if it was new, it would fit me properly and snug enough. I’ve read that it fit like a 30 band originally. My snug under bust measure is 28-28.5” and I prefer bands to stretch to 29-30” best for comfort and support. I should also note that it is also a 3 column hook set, unlike many that have 4 columns. A 70 band brand new might be too loose on the loosest hooks but ok on the next set in. Most of the time I’m good with the middle hooks, as I said, but it’s nice to have the option of going to the loosest hooks if I have a bit of rib cage inflammation and pain (undiagnosed Costocondritis) or just swelling at the end of the day while I relax on the couch.

The material is quite soft and silky. The pattern is quite unique as well as the colour combination. I like the grey accents. I’m also a sucker for paisley. It’s a very understated paisley, if I might add. The pale peach base is a little shimmery in the way silk and satin are, and is nice against my skin tone. This pattern does show through thin tops do definitely not a nude/neutral T-shirt bra. The straps are nice and thin for my petite frame, yet I feel like they’re sturdy enough in my size range. They’re probably too thin for larger sizes.

I wore it to work earlier this week and I pretty much forgot I had it on. I wore it again a few days later. It’s seriously comfortable. The straps moved in is great, and the reduction in cup height is good. I’m not sure if I actually need a reduced gore or not. Maybe if it wasn’t reduced, I would have a little bit less soft tissue center full spilling. But it might just add to a better proportion all over if the cups and gore are reduced. I’m questioning whether or not I can do a regular Comexim with the same alterations in a cup size bigger. Would a 65J/70HH with the straps moved in, cups reduced, and gore reduced by 2cm all around do the trick?

I’m pretty pleased with this bra so far. I can see why Anna Pardal was liked so much. I hope I can get the same success in a Comexim plunge with alterations.