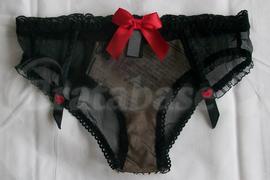 So, the band is so so tight, doesn't stretch much, and the chiffony ribbon along the edge is itchy. I have to use an extender just to get it off my flesh a bit. I bought this used, but I really don't know how used it was since the hook and eyes look new and the band is so rigid.
The cups are too big for me. Too big, too open, whatever. It amounts to the same, I can't fill them up unaided. So, I stuff it. One pad on my left, two on my right. This fixes that problem. For some reason, my bra doesn't have pockets so I have to use double sided tape to hold them in place.
The straps are more of that stretchy nonsense, but they adjust well and stay put. The little split thing in the front is cute, and uncomfortable. It pinches me.
The wire width is good and I find that part very comfortable. Which is good, because that's the only thing I can't tweak.
Shape is up front, round and lifted as I expect from every Polish bra ever at this point.

The bottoms are a 36 (38" wide hip/31" hip bone). They fit, but they're also rigid like the bra. Maybe they'll soften up, maybe the bra will too. I haven't actually worn this for more than a few hours yet. It's too hot for it right now, especially since I have to add pads and have no cotton buffer. Thankfully I do not change size much between summer and winter, so this will have to join my Kabaretka set in my chest until fall.

I love the pattern on this. I have every book themed piece of clothing ever (including some heels that look like encyclopedia spines) I needed this set in my life and I'm keeping it. I'll drop to an A cup and stuff my husbands socks in it!
I could do without the hearts, but I like that they're everywhere. Maybe I'll replace them with something else, but what?

I'm wearing the pads in every photo except for the one that says otherwise.

Also, my specific bra has a review of "Cats" and a blurb about nuclear fission. Literature, felines, and science all on a bra, awesomesauce!

Oct. 2015: I wanted to come back and add some information since I've been wearing this for awhile. The band, while still very snug, has lost some of that rigidity. It doesn't feel quite so tight and it doesn't dig in nearly as much. All the materials of the bra have softened with wash and wear. This makes it fit better and it's far more comfortable.
The split strap in the front continued to stretch, chafe, and interfere with support so I removed it. The bra is still stunning without it and it now fits much better. The cups fit better and I do not need the pads for it to look nice and give good shape.
I'm glad I gave it time, because this bra was truly awful and uncomfortable when I first got it. It really needed some breaking in and now it's almost as nice as my other CHPs.
The bottoms have remained fairly snug through the back. They do cut into my cheek a bit still. So those are strictly for skirts/dresses.