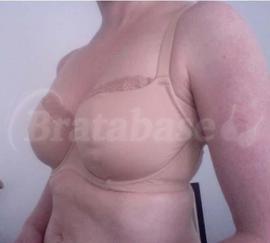 Well, upon initially trying this one on I thought the cups were much too big and went instead for the 28F. (http://www.bratabase.com/bra/dlxu3/) Even so, I wasn't sure about that, nor were fellow Bratabasers, so I decided to try this one on again to see, being sure to firmly anchor the underwires in my IMF. It does seem to fit much better, I have to say, though there is gaping at the top—it's mostly the lace, but the cups do gape a bit (see laptop-held-above-my-head photo). I'm still not sure and per the comments on my 28F, may try 30E and 30F to see what happens there. That does make me nervous, though since I really do prefer 28 bands. We'll see.

All of that (and the odd dents in the fabric I'm not sure would come out in the wash), this is a really comfortable bra, just as the 28F. The fabric is soft, it is comfortable, I do not feel as if the girls are being manipulated (if that makes sense), and though it is plain, it's kind of a pretty plain. As someone who wears a lot of light tops, I do need lighter bras, and though this is a bit dark on me, it's fine.

Just as with the 28F, I am not too keen on the way the straps adjust—from the top down, on the back side of the bra. But that is a small quibble. The straps themselves are slender enough—I think it's the (always failing) Curvy Kates I've tried where the straps seem to be a mile wide, but that's not the case here. They're also sort of slightly padded—it's not obtrusive or bulky, but there is more to them than the standard bra strap.

Now I really just need to figure out the size. As this one has what I consider a fairly obvious defect on one cup, I'll try for the 30 bands, much as I hate to, and see how they look. I do see that the horizontal lines in the band in this are not so bad as those in the F cup. That generally indicates 'too small', though I always wonder how much my spinal deformity affects that, as it definitely causes issues in clothing.

Overall, though, this is a lovely bra. IMO it would be nice if Cleo also released it in other colours once in a while!