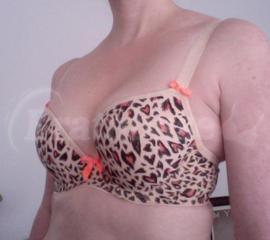 My 30D Deco bands seemed rather loose after a brief period (I like a snug fit and didn't realize when I first discovered Freya that the bands do stretch), so I gave this a try along with another 30D and decided to keep this one.

The first all-day wear (during a road trip...oops) was pretty uncomfortable; I ought to have gone for a breaking-in period! The band remains pretty snug, but this I actually like. That said, the top of the wire does poke into my left side a bit, to the point it's pretty uncomfortable by the end of the day. Maybe I'll try to bend it out? Also, my right girl tends to sort of slip back into the back my bras—sideboob, I guess?—but this is consistent with all bras for me, and is perhaps due to my scoliosis. The 28 band definitely makes this less of something to deal with than my 30 band bras, though, which is probably another reason I like the tighter fit.

This bra DOES give all kinds of oomph, which I definitely like, having pretty wide, full on bottom, and what I suspect are shallow breasts. I do occasionally feel as if the girls are going to spill out of the bra, but they never have, and my husband never seems to mind that effect, either. https://d28qt14g3opchh.cloudfront.net/smileys/icon_wink.gif" alt=";)" /> As someone who spent much of her life feeling inadequate and ugly after being given nothing but 32 and 34 Cs to swim in...I'm not going to complain about the cleavage. Ever!

This is probably my favourite bra, mostly because of the super-snug band (and the oomph). My next try will probably be a 28E, just to see if that helps with some of the poking and the migration during the day, and also because I'm sure tissue has been migrating back to where it belongs since I was introduced to the correct fitting method about 3 years ago.