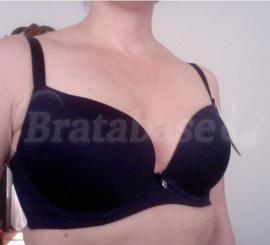 I've this and the 30DD, and can't really figure out which is the better fit. In the 30DD (http://www.bratabase.com/bra/dlvh7/), there's a lot of 'oomph', and I wonder if it is that I like about the smaller one.

So far as the E cup, the band is a fine fit and it's comfortable, but there's gaping at the top of the cups, as I tried to show in one of the photos. That's probably to be expected with a molded-cup bra for someone who is much fuller on the bottom, but it's bothersome to me, is bound to show through certain shirts, and is probably the other reason I prefer the 30DD.

Fit aside, it's a beautiful bra, per usual. I know some won't like the little dangly heart beneath the bow (or the bow!) but thus far I seem to have been restricted to boring bras, so any embellishment is good in my book!

TBH, I will probably send every single bra I bought back and try to start over again. :'( It's too bad, because I love the quality of Parfait bras!