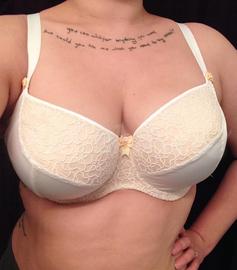 This seems to be one of the bras Cuvy Kate decided to make deeper and narrower (yay for me).
Wires are really narrow for a curvy Kate (similar to comexim) but this is the only 36FF I've tried, all others are 32/34 G+
Band is a little loose because I sister sized up to get it cheap but it's comfortable and I can take it in later.
Gore could be a bit shorter but it's not uncomfortable, I'm just too close set.
Slightly pointed cups, doesn't bother me and will certainly soften with washing but if you like snow globe boobs (nothing wrong with that!) keep that in mind.
Peachy gold color is beautiful next to the ivory. Not a huge fan of the swirly design but it could be worse

EDIT: observations after wearing this a few times (bought a second since it was dirt cheap):
Band is definitely too big. I wear it on the tightest hook and it's stretchy. I don't think it's riding up but I'm very aware of how it feels throughout the day. I don't feel locked and loaded like in my other bras. But I'm a 32/34 so I expected it to be big and plan to take it in. I'd say it's probably a stretchy true-to-size band. If you like them tight maybe consider sizing down.
Wings itch/irritate me by the wire tips. I think the cup is a smidge wide but that it's mostly caused by the fabric and my ridiculously delicate skin, exacerbated by this frigid winter. (It's warmer in Alaska than Michigan right now!)
Straps are way too stretchy for this size range. I know only like 10-20% of the support should come from the straps, but that's still some pretty heavy lifting and they just aren't up to it. Luckily the strapping I bought for my double has minimal stretch.
I think I could benefit from taking in the gore, both because I'm close set and to change the shape of the bra a little, bringing the cups more front and center. The top of the gore already has wires touching so it would just be 1/2"-1" or so at the bottom of the gore. This will also help the band issue.