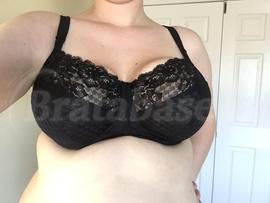 Preface, I am short rooted, even, pendulous, center full and narrowish.

This bra was a close one for me, but it ended up being a too tight band with a too large cup for me. It was one of the few bras that tacked on me and layed flat on where the cup meets the strap, but both of those went away when I added an extender as the band is TTS.

This is a very nice bra. I got great lift out of it when I first tried it on, and only lost a little as my breasts settled into the cups. Extender was probably part of that as well. Stretch lace on the upper part of the cups will help with a range of shapes. It is a bit shallow for me on the bottom and the center, and was pulling me a bit east west, but most bras do that to me as well. I am very center full. I found the bra painful after a while, but that's because the cup was too wide and the wire was cutting in on the outer bottom part of my root on my larger breast. That's the only reason I'm not keeping this one.

Strap is only partially adjustable and might be a problem for people who need a longer strap. I love the lace overlay on the gore. It is a four panel cup, and I was happy with it when I got it. Just too tight for me.


6 months later: I've gone up a cup size and the cup fits me much better. Still using an extender on the black color way of this bra. Been wearing it as a daily wear in tandem with a nude 34HH Envy (which I do not need an extender on). Gore does not tack on me, but I have come to the realization that it will be a difficult fit to find on my shape. I am center heavy with mayhap half a wires width between them halfway on up. This is my best bra I own. I did not get as good a fit out of the 36H as I think I need the cups to just be a touch shallower which I am getting with the smaller band size.