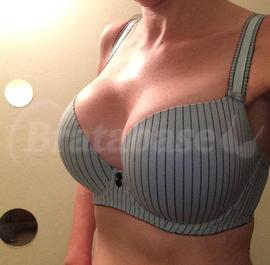 I had a pretty good feeling with the Deco Hatty, in a 28G, after trying the Deco Honey in a 28F and it was too small https://d28qt14g3opchh.cloudfront.net/smileys/icon_sad.gif" alt=":(" /> It gave me a starting point at least. And I LOVED the Honey, so now I know what size to get https://d28qt14g3opchh.cloudfront.net/smileys/icon_smile.gif" alt=":)" /> But as soon as I put this bra on, it was like the angels' choir singing "Hallelujah!!" I FOUND it!! Finally! I just love everything about this bra!! It is PERFECT for my shape! I have even fullness and seem to always end up with quadraboob in every single bra I try...well, not this one! The cups are just the right height/width/depth, its like this bra was made for my girls. Lol! The band is perfect for my narrow 27" ribcage, on the loosest hook. Very snug, but not unbearably tight. The gore lies perfectly against my sternum, no wires digging in. The straps are rather comfy and thick. This bra gives a great lift with an amazing shape!! I am a bit bummed that I don't seem to be getting terrific cleavage, but it's doable. I could probably even swing a 28FF and really get some nice cleavage but i didn't want to risk more quad boob. I like the color as well, a very soothing teal ("glacier").

Overall, I would highly recommend the Deco Hatty as an everyday, regular type of bra. It looks great under clothes, tho I will say there is a slight line from the top of the cups showing thru but nothing worth sacrificing the bra for. I am so happy I finally found what I was looking for and a size that works for me! I think this bra runs pretty true to size since I was just measured at a 28G https://d28qt14g3opchh.cloudfront.net/smileys/icon_smile.gif" alt=":)" /> I just love Freya! And will certainly be acquiring more models in the future, absolutely the Deco Honey again, that was my fav (awesome cleavage and lift)! I feel like the Hatty is a more "toned down" version of the Honey, the Honey just gives the girls a bit more oomph https://d28qt14g3opchh.cloudfront.net/smileys/icon_wink.gif" alt=";)" /> But that's why I would consider the Hatty as a more practical, everyday bra.

Update: After wearing this bra for an entire day, I think it might be better to go down a cup size and try the FF. I had to keep scooping n swooping to avoid gaping in the cups. I also had to tighten the straps way too much to try to stop the gaping. The gore started to bother me as well, and the wires were digging into my sternum because they were just too high. I had to keep pushing the gore back down. The fact that I had to tighten the straps wasn't helping this. I'm so bummed. Oh well, I can def hang onto this one until I find a replacement. Hoping to find a 28FF in the purple.

Second Update: I LOVE this bra and have been determined to make it work. So, I tried wearing it on the SECOND hook and eye and tightened the straps just a hair, and what a difference! I think it just is taking me some getting used to since all I've ever worn are VS padded plunges my whole life. But taking the band in a little bit made ALL the difference! The cups seem to fit perfectly now https://d28qt14g3opchh.cloudfront.net/smileys/icon_smile.gif" alt=":)" /> I really don't think going down a cup would be better. I think a FF would cause major quad boob. I just have to get used to the gore being a little taller. I still love the shape this bra gives me and I think with the band being too loose it made the cups slightly awkward. But MUCH better now https://d28qt14g3opchh.cloudfront.net/smileys/icon_smile.gif" alt=":)" />

Fits nicely, but could probably even go down a cup size to a FF