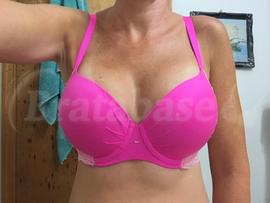 I've been dying to try the Fabulous Lined Demi for a couple years now, since my epic fail with the Fabulous Plunge Push-up in the wrong size :/ Lol. Unfortunately, this style has since been discontinued. Figures too, because this is probably one of the best bras I've ever worn from Vicky thus far. Guess I missed that train. It's a shame, it seems like all the good bras they used to make have now been redesigned, revamped, revised or revoked altogether!

I really wish I had tried this bra sooner. I found this one on the Poshmark shopping app for a good deal and was NOT expecting such a great fit! It's near perfect. The cups are actually deep enough for me, I'm not getting any empty space at the bottom of the cup, no quad boob, the gore is actually tacking, and the band is super tight!! Check, check AND check!! It's so soft on the inside of the cup, like a micro Fleece, and I literally don't have to touch the bra or the girls at all while wearing it. The band doesn't ride up not a one centimeter, the straps are perfectly placed and I don't have to constantly readjust. I just wish Vicky would stop discontinuing these bras https://d28qt14g3opchh.cloudfront.net/smileys/icon_sad.gif" alt=":(" /> The only con I would say is when it gets hot, the Fleece seems to make your boobs sweat. No bueno.