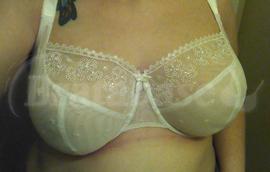 Cleo's supposed to have fairly wide wires and Lucy good for FOB shapes, so I decided to give it a go. I think I'm pretty happy with it.

I did not expect the fabric to be as thin as it is, though. Maybe it's just because it's white, but it's VERY thin. I can see my nipples pretty clearly through the material, and they are not much darker than the rest of my skin. It doesn't bother me much, but still, that was slightly unexpected.

Aside from that - the band fastened without any issues; it's a bit snug but it's also brand new so that's not too surprising. It's not uncomfortable by any means. No real wrinkling on the cups other than a bit on my smaller breast but I've come to expect that anyway. Wires sit wide enough that they don't seem to be on any breast tissue - they're comfortable. Both the gore and the sides don't come up high enough to be annoying; still higher than I want but I guess I need to just cave and buy some plunges for low-enough gores.

The shape is...wow. It's very high and very rounded. Like, it gives me serious "cakes on a plate" boobs. I knew that Cleo is known for high rounded shapes but I kinda didn't think my breasts were possible of the shape they're in while wearing this. Looking at the pics I took, it almost makes the front of my breasts look slightly flat, but I didn't really notice it like that while I was wearing it.

I wish it had a three-hook enclosure instead of a two-hook, but oh well. I'll live, I suppose.

Overall, I'm thinking this one will be a keeper. It's cute, it's comfy, and I need more than one bra that fits me properly.