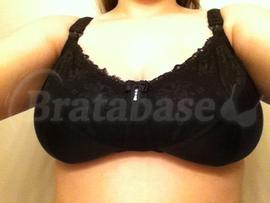 I won this from the Bras and Body Image two year giveaway, though it didn't come with underpants like the giveaway said. I've contacted Hotmilk about this, but still haven't heard back. Hrm. I was excited for those underpants, too, since I have another pair of Hotmilk panties which fit like a dream. Who would have guessed that maternity panties work exceedingly well for fat people? I've always been annoyed by the way most underpants sit at my tummy. Anyway, on to the bra! It's pretty, and wireless, and the drop cups are even more of a hit with Mr. BF than I thought they would be. The band is a pretty good fit, but as I anticipated, I feel like the cups are a bit small. My boobs sit in the middle where wires would usually be, and they look like they almost want to jump out. Honestly, since they look nice and cleavagey like that, and the bra is pretty, I just might display the top of the bra occasionally.


Edit 1: I cut off the bow because it looked oddly lumpy under tops.

Edit 2: After not hearing back via email, I contacted them on Facebook and learned that they had attempted to email me back, but that system was having some issues. The panties are delightful indeed! They also sent me some lip balm to make up for their little oops. Sadly, I couldn't use it because one of the ingredients was almond oil (curse my allergies!) so I gave it to a friend.