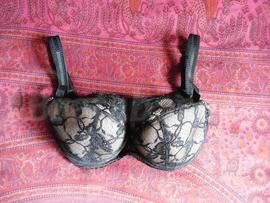 This was my second purchase from Ewa Michalak after my 65GG - Ewa Michalak » Pl Onyks (196). This bra fits me well and is both supportive and flattering. Sizing down to a 30G was an improvement in fit mainly due to narrower and shorter cups. I almost always struggle with cups being too high under the arm. My 28GG - Freya » Deco (4234) is very tall under the arms, if it were any taller I think it would be unwearable. The Pl Onyks is lower than the Deco but higher than I'd like and the Pl Black is even lower under the arms and therefore much more comfortable for me. Also, sizing down in the cup prevented any gaping such as that which I initially experienced in the Pl Onyks.
I have read many people online recommending to size up in the cup from one's British size when choosing an Ewa Michalak Pl model but I find the opposite to be true. Whilst my most comfortable size in most British bras would usually be 30GG and sometimes 30G, I am happy to take 30G (and 32FF) in Ewa Michalak because of the depth of the cups, especially at the base of the cups. Being able to wear the smaller size means narrower wires, shorter cups and less overall coverage which is exactly what I require.
I must admit that this is not the most comfortable bra, probably due to the material, but it has become more comfortable with wear and I imagine will continue to do so. It took quite a few months for my Freya Deco to become comfortable enough for me so I think this is a process I will just have to endure with virtually any bra.
The only other issue I really have is that the wires dig in under the cups and at the gore. It is not too uncomfortable for the most part but of course the longer I wear the bra the worse it feels. I have slightly turned the wires away from my sternum at the gore and this has helped a great deal. So far I have found the wires in Ewa Michalak's bras to be very rigid which has advantages and disadvantages. I'd rather have these wires than weak wires that distort, flatten the cup, give a bad shape and hinder support.
Overall this is a well-fitting, attractive bra with which I am happy https://d28qt14g3opchh.cloudfront.net/smileys/icon_smile.gif" alt=":)" />

Center gore comfort:
Underwires dig into sternum, because they are too low
Strap separation:
Not a problem
Underwire length:
Is too short on the side, boobs escape