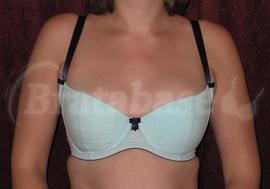 This is the most bizarre bra I've ever tried on. I heard that the cups ran small, but holy cow! And I think the shape of the cups has gone well beyond shallow. I've truly never had so many fit issues with a bra before. The band was so tight that I could barely fasten it - in fact I was worried I would rip it in two just trying to put it on. The cups are very tall and shallow to the extreme, and I felt like I was quad-boobing up to my clavicles. The underwire was very wide (and I think it was pulled out of shape even wider as the band was so short), though I did like the height of the wings. The vast majority of my bras have underwires/wings that are far too short on me, but these tall wings/cups actually contained all the tissue I have up there. Oh gosh, and then the straps - I think both the front and back of the straps were essentially under my arms (hugely too far apart!). Such a strange bra! The aqua and navy is one of my favorite color combinations, so I was excited to see it in this bra. But with a fit this bad I'll be happy to send it back.