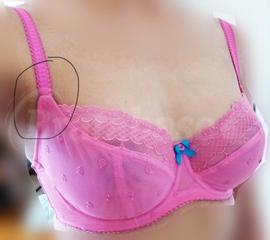 I'm fuller on bottom, and somewhat even, but definitely not full-on-top. So please take with a grain of salt those who claim (usually due to hearsay) that this bra is the one you try to test if you're full-on-top, or that it would not work for full-on-bottom breasts. I wish I had tried it earlier.

This bra can work for you if you are bottom-heavy because of the forgiving upper lace section. If you want to test if you are full-on-top and more shallow than projected, try the Cleo Juna, with its wide upper and shallow lower section. This bra is not shallow at all, so if you are full-on-bottom and shallow, that's a whole different story.

These cups fit perfectly on me, and the mesh lace upper section lies nearly flat against even my smaller boob. The Marcie does not have the "speed bump" issue that Cleo Millie / Lily / "sister cuts" have. Specifically, the lace section on those other narrow, projected Cleos will bulge and be loose where the thinner mesh or lace meets the cup, unless you're definitely full-on-top. Also, unlike those "sister cuts," the Marcie is made from a solid color of soft mesh, whereas those have smooth, unstretchy fabric underneath a loose mesh top section.

Good immediate projection, relatively narrow wires/cup widths--one of the narrowest cups you can get in this size without going to a Polish brand (5.2"). However, the wires become wider at the top outsides of the cups, which is annoying because the edges of the cups are almost under the armpits.

The tops of the cups, and therefore the straps, are a bit too far apart for me. Straps are pretty thin (not strap width, but thickness of the strap when you pinch it), so they cut in a little.

The elastic of the band also cuts in, mostly because I am muscular--I wish Panache and Cleo used thicker, less stretchy materials on their unpadded bras, so that the elastic would not always be tighter than the band. I also wish the Marcie came in a longline style. That would solve the only discomfort issue I have with this thin band. Wires under stiffer fabric were also painful against the sternum and ribs initially, but bending them and washing the bra helped a lot.

The cups in 28F run very slightly small at first, but stretch out with wear. The band is extremely tight at first--I think the Marcie could work on someone who needs 26 bands, because I'm about 27".

This review was for the pink color after three wears and one wash.