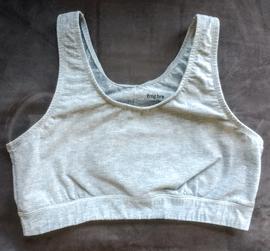 This bra is made of a stiff, woven fabric which is 32% Lycra spandex (more than twice the usual spandex content in even the most "high impact" sport bras). It's advertised as the ultimate compression sport bra if you want zero bounce whatsoever and to not even know you have boobs. Some don't like it because it is extremely smooshing. That is exactly why I do like it. It doubles as the most effective binder for large breasts that I know of. As a person in the 30GG (UK) size range, who wants to bind and dress in men's clothes most of the time, the more compression the better.

I have tried traditional binders from the most popular brands for larger chests, Underworks and G2CB, but they both proved poor fits for my small band/large cup size, and in the same way. The medium size was too small to even get on, and the large was too large in many ways (straps, ribs) while still being too small in the front panel, so that my breast tissue got pushed out into giant, unsightly bulges in my armpit area and under the too-larger straps. These lumps were more bizarre, obvious, and attention-grabbing than breasts, so the binders were not only not very effective, but actually rated beneath regular bra in terms of 'how comfortable I would be wearing them out.' At best, they flattened as well as a good sport bra (smooshing and creating a thick wall of 'monoboob', not really flattening - I am simply too large for that).

The T9 Frog Bra also creates 'monoboob', but the compression level means it is more flattening than other sport bras I have tried. It gets me down from a natural 40" to about a 35" chest circumference, which is pretty good (and about as good as the binders). The 35" monoboob area is still noticeably larger than my 30" ribcage, and in a tight knit T-shirt, I just look like a woman in a sport bra. But it's flat enough to disappear pretty well under a woven or button-down shirt. (Compare the clothed images with my clothed images on my 30GG - Cleo » Blake Balconnet Bra (9151) where I am wearing the same clothes to see the difference.)

Both the medium and large sizes produce about the same level of binding, but the medium did create some of those armpit bulges from not being big enough across the front. Additionally, the medium felt tight on, but the large is very comfortable for all-day wear. As a plus, it doesn't restrict the breathing like most binders, so I feel comfortable wearing it for longer periods of time. With the large, the band is definitely too large (I can stick a fingers under it without stretching), but the power of this bra comes from the compression, which is strong enough to hold the breasts in place without any help from the band. It literally doesn't matter that the band is way too big because the boobs don't slip down - they're not going anywhere. This might change if the spandex gets stretched out and stops working as well; in that case I would have to replace the bra pretty quickly.

I currently own 4 copies of this bra and rely on them almost daily for binding, usually for 8-10 hours at a time. They remain fairly comfortable throughout the day. I am very happy that I found this bra; it's the only binding solution that remotely works for me, and it allows me to live my life in 'boy mode' (men's dress code at work, etc.) and to forget about my breasts most of the day, which is very important for my mental health at the moment.

I haven't actually tried this as a sport bra - I'm saving them for use as binders and continue to use the 32G - Shock Absorber » Active Multi Sports (4490) for running.