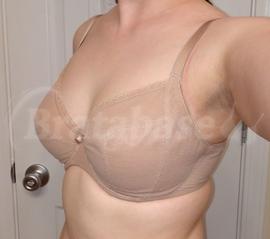 Alright, so two days in a row now I've planned to write this review (finally), and both times I put this bra on and had no discomfort whatsoever, which is saying something since this is usually my most uncomfortable bra. Third time's the charm? Anyway, I've had this bra since last summer and just never got around to reviewing it. It's the suede colorway, which is a pretty good nude for me, if slightly dark, although I am pasty, and I have it on the tightest hook, which is still snug.

Reasons it's uncomfortable: mostly the wires. Chantelle's gores and I just don't get along, because they're too tall and too wide and they poke and I can't seem to find a model that doesn't, aside from the push-ups which don't suit me at all. The wires are usually very firm, and extremely so in this bra, so any time I slouch, lean sideways, bend over, or even breathe deeply, the bottom of the curve presses painfully into the ribs that must be just underneath. (Except for, y'know, today for some reason.) Also, the fabric of the band is two layers of mesh, which doesn't feel as stretchy as the elastics at the top and bottom edges of the band, leading to some minor bulging and the sensation of the elastics digging in. Superficially, it's not the softest bra ever, but it is smooth under clothes and some might prefer its matte mesh finish.

The cups, while not uncomfortable, have several signs of not being quite the right shape. They're too tall for me, with the proper apex sitting ideally about 1.5cm higher than mine (and in that case would better suit someone with a more projected and shorter root on top), so instead the un-padded cup collapses and the extra fabric wrinkles down by the wire. I think there's a little more apex projection than I need, too, but mine is moderate anyway and that's not really noticeable while wearing it. The immediate projection at the base is good, although still not enough, causing the bra to scooch down during the day. They're a hair too far apart for me, and I'm not sure if the top edge didn't cause some faux-quadboob on my tall roots when it was new, because this is the most closed-off of all my current bras and the T-seam cup style never works for me in any others.

Good stuff: The wire channels have almost 2cm of space in them, and shifting the wires out helps immensely at the sternum and also at the wing, which would be tall enough but needs the backup from the wire because of my Super Side Boob trying to escape. Ladies with shorter torsos may find that the top edge of the side-sling panel chafes, however, because it is tall, but it makes me feel nice and secure, especially considering that the band tapers down to 4 (4!) sets of 2 hooks. The straps are fully adjustable, which is great, and also in a wonderful spot on the cups, which means no buckling on the top edge of the cup and no armpit blisters!

A good nude staple, but Chantelle has got to chill with these wires

Center gore comfort:
Underwires dig into sternum, because they are too low
Bottom of the cup:
Can't quite fill it
Cups separation:
Too separate for my boobs