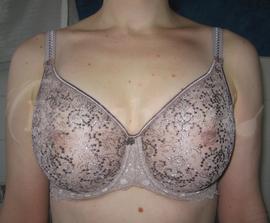 This is the result of my recent visit in Empreinte’s atelier. I initially just wanted to discover the brand and determine my size.
If I were to buy an Empreinte bra on internet, I would probably try a 80E (and this is also the size their online calculator suggests). The French 80 bands translate to the British 30. In theory, my British 30F size translates to the European 65G or French 80G but I seem to mostly wear 80F in French brands. As Empreinte’s cups are known for being deep, I would probably go down from the 80F to the 80E. I couldn’t be more wrong… Thus I’m happy I actually got fitted by them.
After being measured, I was given a 75F to try on but it turned out way too big in the cups. The 75E was perfect in terms of cup volume. I was really surprised when I saw the label – it says the 75E is equivalent to 30E. Normally, the French 75 bands translate to the British 28 but it seems Empreinte has its own sizing chart.
I tried two types of construction: the seamless one and the 3 part balconette they call “corbeille”. I’m very disappointed because the balconette doesn’t work on my breast shape https://d28qt14g3opchh.cloudfront.net/smileys/icon_sad.gif" alt=":(" /> I love their balconettes because they have the best designs and the most beautiful laces, but unfortunately in 75E the gore is too high and very hard making it painful and the cups are too closed off (even if I’m FOB). I tried the sister size 80D hoping the wires would be softer and the looser band would make the gore wearable. The wires are the same, but the gore and the cups are actually lower. This size could work but the band is unfortunately too loose.
The other styles I tried were the seamless Melody and Cassiopée. I was very surprised with the fit. The cups are very high and I would call this cut fullcup. I’ve never bought fullcups because I thought they give a pointy shape but this one is surprisingly rounded. It’s also a tiny bit to closed off but there’s no major quadding. The underwires are quite narrow, comparable to the EM, and hard but I don’t have the gore issue in this cut. As mentioned, the cups offer much coverage and the straps attachment is placed really high. I thought it would result in empty space in the upper part as I don’t really have breast tissue up there but there’s no wrinkling. I already have some unpadded bras and they all have cups running high under the armpits causing some discomfort. There’s no such issue in this bra as the straps are quite close set. I would possibly prefer them wider because I have narrow root but I can deal with it. The straps seem sturdy and their stretchiness is only 30% according to the label, offering great support. They’re also rather long so they can accommodate low set breast. The band is very comfortable. It also seems it’ll stretch out a little bit because it’s only made of a single layer and the elastics seem less sturdy than in EM bras, but I don’t think it’ll require alteration.
There are no words to describe how beautiful this bra is. I love laces but I’ve never seen a lace like this before. It’s intricate and shiny, all that I love! I think it’s right to say that I’ve never worn such a beautiful bra so far, I feel like a queen wearing it ^^. The quality and the materials are really good and the bra is really well made. However, when I compare it to my other bras, I have to admit that EM materials are the most suitable for the size and thus the most comfortable and the only Avocado I own is the best made bra I’ve ever seen (even if the shape and comfort aren’t perfect). This comparison proves that the Polish brands make a great job even though the French brands use incredibly beautiful materials.