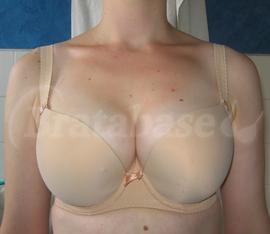 I’ve got this bra since 2012. I ordered it encouraged by the spectacular cleavage the famous Deco gives. It turned out to be a little bit too big in the cups at the time, I could only wear it during a few days in a month and even then, the cups tended to gap at the top. Then I accidentally put it into washing machine and this unfortunate incident definitely sealed the fate of this bra – while the band and the straps are very sturdy and still look perfect, the cups are seriously damaged, as you can see on the pics. I put the Deco at the back of my drawer and haven’t worn it ever since. In the meantime I bought a Deco Honey in 28E which fitted much better but was too shallow for my boobs (even if they’re soft, they’re also rather projected) and the cups too narrow.
As my size increased recently, I decided to give it the last try and I can finally say it fits as it’s supposed to. In this size there’s enough projection, the underwires are perfect and the cups don’t gap. I really like the super wide Freya straps for their comfort. The band runs loose (typical for this brand). I don’t think I would be able to fasten any 28 band but Freya. This one is just perfect.
Even though the Deco actually fits, I don’t think I’ll be purchasing a new one in the future. I actually don’t like the thick foam and I’m very disappointed by the quality of this bra.