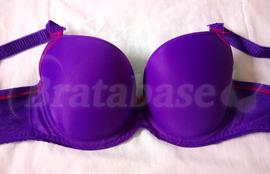 What sorcery is this? A Deco that fits?!

I wrote off Freya's Deco plunge bra nearly 2 years ago when it was a total fail for me. My very soft tissue spilled out of the center right away if I moved or bent over. With short roots and high set breasts, the wires poked and the top edge of the cups rested in my armpits (cups were too tall). It also felt like I was wearing a straight jacket. The cups felt thick and the wires were torture. The Deco became my archetype of a bra that just would never work for me.

I even tried a few Deco bras at Nordstrom with two different fitters. They both had a tendency to tighten the straps far too much for comfort and I think that also distorted my view of a good fit.

I read reviews since then that suggested that new models of the Deco with the trim along the edge of the cup had an improved fit. I ignored those reviews because Deco would never work for my pudding boobs.

Fast forward 2 years and I just re-measured myself a couple of weeks ago. I've lost a bit of weight and gone down from 30G/GG to 28G. For some unknown reason, I ordered a Freya Deco Vibe that was on sale with free returns. I think it was the cheapest bra I could find in size 28G and figured even if it didn't work, I could test the volume of it.

Then the unthinkable happened. It fit! Seriously, this bra fits me like a glove. My tissue is contained above the gore by the binding along the top of the cup. The wires might be a tad wide, but they're not too tall. I actually don't mind a *slightly* wide cup and prefer it to a very narrow, projected one. The cup height is about 7", which works for me (surprisingly), but the strap edge comes up a little higher. That would be the only thing I would change because I get "strap gap" when I slouch. The gaping is really not that severe, though, and I just have to adjust the straps with a bit of precision and I get a beautiful silhouette. What I've also learned is that I don't need as high a gore as I thought. I have a short torso, anyway. I just need a bra that doesn't allow my inner fullness to spill out so easily.

I'm super excited by how smooth and uplifted my profile is with this bra. I once remarked that I wish Freya Decos would fit me, because I would just buy a bunch of them and never need another bra. I'm pretty close to doing that. Time will tell if the bra continues to fit beautifully with wear. Then my wallet will become sad.

When testing it, I find that if I bend over completely to pick something up off the floor, I might have to readjust or my boobs wrinkle a little towards the center. I don't own a bra yet that doesn't do this, so it's not a deal breaker.

Now for the annoying part. The selling point for the Vibe is the racer-back conversion J-hook attachment. This could be a useful addition to my wardrobe, especially for the warmer weather. Unfortunately, I have to tighten the straps on this bra so much that the adjusters are on the front, which means that for normal wear, the J-hook is also at the front. It irritates my skin and you can see the hook part through some shirts. I also tend to wear a backpack when traveling and think that the J-hook would cause major problems with snagging. I will probably have to snip it off with wire cutters, which breaks my heart.

The cups are a little too tall towards the outside.