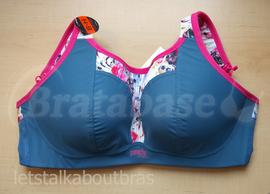 In fact, the 30FF fit much like my 30G that I also have in this bra in an older colorway. So there is a chance that the floral/gray colorway runs a little big in the cup compared with the black/geo which, in my opinion, runs true to size. The standard advice with Panache's *wired* sports bra is to size down in the cup. Previously, I would not have suggested this for the non-wired. Now I would say do not rule this out if you are less full on top.

When I took the bra out of the box, I was certain it would be too small. I was surprised by, visually, how scaled down the 30F is compared to the 30FF and 30G. The measurements reflect this, saving 1/4 inch on the cup height and gore height measurements. For someone petite, high-set and short-rooted, this 1/4" makes all the difference in the fit of the bra for me. I no longer have a gaping chest panel or bunching material. The straps are also comfortable tightened pretty much all the way. I would still like a tad more length, but it's sufficient, unlike the 30FF where the straps were a little loose.

The band feels even better (more snug) than the 30FF. I am contained in the cups and the gore separates well. There is at least 1/2 inch reduction in cup width compared with the 30FF. The side/underarm area does not reach into my armpits and I am super excited about that. Once again, the Panache Non-Wired Sport in an accurate size for me has pretty much become my best fitting bra.

Appearance: I am pleased with the colorway/pattern even though I realize now that the straps will probably be on show a lot and they are a little bit "loud". I would have preferred solid blue straps. The east/west pointiness is also reduced by being in a better size, but it's still there for me. I wish it were just a little more rounded. It's still a fantastic appearance under clothes for a sports bra.

Quality: My only lingering issue with this bra is that the inside of the cups easily creases towards the bottom after wearing, even just for a minute or two. This is not a projection issue. As I have tried and worn this bra in a few sizes now, I think it is to do with the construction and how the foam cup is anchored to the wireless band.

Final notes: this bra arrived with the center of one cup a tiny bit dented right at the middle. It wasn't packed harshly and I don't know if it will loosen with time, but it's not noticeable when wearing, anyway. The wrinkles/buckling on the seams that you can see in the photos only appear when the bra is not being worn.

Pro-tip: Short rooted and/or pendulous and those with flared ribs, do not forget to hike this bra up into your IMF before S&S to make sure it's sitting right.

Lost weight and now the cup is too big. Clipping the j hook with the straps tightened all the way helps.