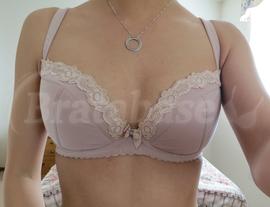 One of my favourite Ewa bras of all time. I own one already in 65E, but when I saw that someone was selling a 70DD, I decided to get it because its the bra that creates the best cleavage, with the best comfort all while being the right size. This particular 70DD though, is a newer version of the Porcelanka. They used a different fabric to make the cups and band, and the trimmings for the straps are different where the adjusters are. This doesn't really make a difference to me.
There are some minor construction differences I've noticed between the 70DD and 65E though (and this may just be because of time, that they changed the cut of the 3D bras or maybe it could also be because of the different sizes). The 70DD has slightly larger cups because the underwires come up a little bit higher at the armpit. This makes the cups fit slightly larger than the 65E I have. I would say the cups are almost the same size as a 65F 3D bra I own. I also do not mind these changes. The cups of the bra still fit me wonderfully, but it does have less cleavage than the 65E. The band on this bra runs quite tight. It is more like a true 30 band, but it is still too large for me, so I altered it down a bit.
Overall, I'm quite happy to have another one of these. I know Ewa makes too many beautiful bras.. its strange to have 2 of the same one but this is *slightly* different than the other one so it is sort of a different bra https://d28qt14g3opchh.cloudfront.net/smileys/icon_smile.gif" alt=":)" />