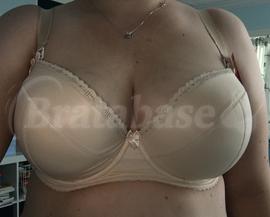 When I first put this bra on, I really really liked it, but after wearing it around the house for an hour or two I think it might get returned. It fits well enough, and it's relatively comfortable, but I'm just not sure it works for me given the size difference on my left and right.

I've been nursing for almost 4 years at this point, and there's about a cup size difference between right and left. Sometimes, in certain bras, it looks worse than others. I have another plunge bra from Ewa that fits great with zero problems, but that one also has a cookie pocket that I can use to my advantage. In this bra, the left cup fits perfectly on my larger breast, but the right cup gaps a lot. I don't think anyone else would notice, but it drives me nuts. There is no cookie pocket on this style.

There was also some minor wrinkling at the bottom of the cups. You can see it a little bit in the photos, but it became more pronounced the longer I wore the bra. It was never really awful, but combined with the gap issue on my right side, I'm just not super confident in this bra. It's a really great nursing bra though! I may change my mind in a few weeks and reorder it, haha. I did test it out with a cookie just placed in the cup and it fixed about 80% of the gap issue, but especially in a nursing bra you want something to stay in place. The cup will be flapped open and shut all day, I don't want to have to keep readjusting the cookie.

For those hoping for some information about the construction of the nursing clip, it is a bright white clip on a beige side sling. The sling material feels like cotton. I'm a little disappointed that they chose to use a white clip on a bra with 100% beige hardware and fabric; it looks cheap and out of place. The clip functions as expected.

Aesthetically, it's a really beautiful beige nursing bra (if you ignore that white clip). The lace along the top of the cup has a subtle thread of sparkly silver woven through it. It has the potential to be a great staple of your bra wardrobe if you are a nursing mom.

Fits really well on my larger side, some gaping on smaller side