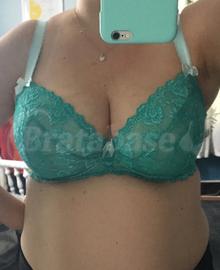 I spent about a month doing various returns/exchanges with Zathiya before I settled on a 75GG in this bra, and I am pretty sure I snagged the last one in my size! I'm going to say it's true to size because all the bras I've bought recently (Panache, Cleo, Curvy Kate, Fantasie) are in the 32H/34GG neighborhood and this fits just as well. The band is comfortable on the loosest hooks; I have to wear the asymmetry pad on my right (see pics) but once I do that the cups fit just right with no gaps or spillage.

This bra is so, so pretty in person! The aqua color of the lace in all the stock photos is true to life. The straps are a very light blue. The lace goes all the way around, which is both a nice aesthetic detail and adds some structure to the band. In some of my other bras the elastic on the top and bottom of the band is much tighter than the band material, which leads to extra back rolls, but this one doesn't do that. I tried to add a picture of my back so you can see how nice and smooth the band is.

My bra has a tiny spot on the left cup at the T-junction of the seams where the lace doesn't lie flat. It's not a fit issue, it's actually from the way the bra was sewn, but it's not visible under clothes and I think it will probably smooth out a bit with time. The bra was shipped to me in a polymailer, and it was folded right along the seam at the top of the cup, and I think that is contributing to it. I think this is also making it a bit pointier than it would normally be.

This is the only bra I own that actually gives me cleavage! I have very very short roots and it's nice to own a plunge so the gore doesn't come up to my chin. I wore this bra for 8 hours at work the day after I received it, and it was comfortable enough I forgot I was wearing it. Despite the way it may appear in the pictures, the gore does tack very well.

Pros: Great cleavage, makes me look thinner from the front because it pulls everything in to the center, the material used on the band is appropriately firm

Cons: Lace is very textured and shows under thin shirts; minor torpedo shape (will probably get better once bra has been washed, see above comments about it getting crushed a bit during shipping)