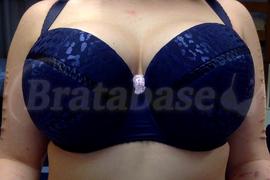 This is the second EM bra I've tried (the first was an S Colette in a 75HH) and while it is a better fit, it is definitely less comfortable. The bra is a three part cup, with a ribbon sewed onto the top seam. Unfortunately, this ribbon embellishment looks a bit odd under clothes (it creates almost a pointed look). It is a beautiful looking bra though, with a mesh animal print overlay and a light purple flower in the center of the bra.
The fit of this bra is amazing! I think that the cup is actually slightly larger than that of the 75HH Colette that I tried (either that or I shrunk a little bit, which is also possible. We'll know when I get around to measuring I guess). I was almost quadding out of the Colette but this one perfectly contains me. The wires are narrow enough for me, and it offers great projection and lift (I think that the angle picture I have up doesn't do this bra justice). My one fit complaint would have to be the straps (I know, that's everyones complaint). The straps actually weren't an issue for me in the Colette that I tried, but these straps feel a little different somehow. I think that part of it is the material. The bra has a mesh overlay which is a little itchy on my armpit. I think that these straps might also be a little bit more wide set.
Minor issues aside though, I love how this bra looks on me and its definitely a keeper! I'll just throw in a little side note on the bottoms though (which are super comfy): if you're between sizes, definitely get the smaller one! With 43 inch hips, I wish I'd gone for the large (42) rather than the XL (44).