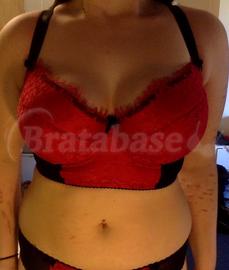 My Comexims are finally here! I'll input my Charme later, though the fit is pretty similar (with the Charme having maybe a teeny bit more cup volume, though I wish it was the opposite since I ordered the Rita with cookie pockets!). For now I'll start with this bra.

I ordered the Rita in a 70N with the following alterations:
Reduced cup height
Raised gore
Straps moved in
Added cookie pockets
Made into a longline
Extra column of hooks

The reduced cup height definitely works well for me. I don't have the strap gap that I experienced in the Sonia (disclaimer: Sonia plunge is my only unaltered Comexim, so I'll be drawing lots of comparisons to it). The cup height was mainly reduced near the outside of the cup, though I'm not sure how much of this is due to the fact that I raised the gore as well (which kind of makes it hard to reduce the cup height near the middle).

The raised gore also works really well for me. I don't have the same sense that I'm about to fall into the middle that I had with the standard gore height. I think that it works because I'm not super close set and don't have tons of inner fullness. It makes the bra fit more like a balconette, which tends to hold everything in a little better for me.

I'm unsure as to whether or not the straps were moved in. They look like they're placed similarly to my Sonia, which was unaltered. I'll probably have them moved in a little more next time, but they work well enough as is.

I haven't tried this bra on with pads in the cookie pockets yet, but I'm glad I added them. There isn't really ever a downside to adding them, so I've added them to all of my Comexim orders (except the Charme because I forgot). I'm hoping that I'll get a little more oomph with pads in, since the alterations I requested make this bra fit less like a plunge bra (which means I lose some cleavage).

I was nervous about the band of this bra fitting since I had had it made into a longline. My ribcage is flared at the bottom, which I didn't consider until well after I had ordered the bra. I was nervous about it being too tight at the bottom, but it actually fits me really well. I almost wish though that it was a bit tighter at the top. It's not loose enough that I want to wear it on the second set of hooks just yet, but I think I will have to move there sooner than I'd like. The band measures at 32.5 stretched, which is a full inch larger than my comfortable rib cage measurement.

Now for a few more technical notes that aren't related to the alterations I requested. This bra seems to be narrower and deeper than the Sonia plunge bra. The depth could be due to the fact that this is one size larger (and that likely is why), but the narrower wires aren't what I expected. I tend to do better with narrower, more projected bras though so its perfect for me! The ribbon on the top of this bra also makes it more closed on top that the Sonia, so if you're fuller on top or have taller roots, this might be something to take into account. I love this bra though!