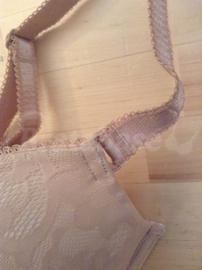 Have a love hate relationship with this bra. I have to alter the straps to be on the top of the cups like they are on like every other bra in the world. But they are cheap and well made so it's a fault I can deal with. The thing that bugs me is that I have a feeling they designed it that way for women who are wearing an ill fitting bra, anyways.... if I don't alter the straps the cup curls inwardly and gaps.
This fits my right breast perfectly, but on my more projected and higher up left breast I don't fill out the bottom, but that is expected.
I've bought a couple of these in the past and thought I could do better, but after a couple months without them I realized this was my best fitting padded underwire bra, until I tried the Cleo Neve, so this is second in line now.
I do get slight quad boob, but once my breast settle into the cup it's fine. It does slightly feel like it's smashing me down a tad, but oh wells....
The wires are similar to Panache Idina (is more closed on top) and Cleo Maddie (is more open on top), so if you want something more full coverage and not closed on top or too open, this might do well on you.