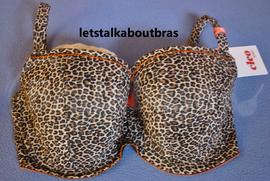 This bra had been on my increasingly diminishing list of must-tries for months. My dream bra is a padded-to-molded balconette with minimal detailing or seams to show through shirts and ideally with narrowish (but not tall) wires. What few measurements were available on Bratabase seemed to confirm that this would be the case with Mimi. My pendulous, high-set boobs consistently strike out with Cleo's unlined bras (ugh, just awful, even the magical Lily that so many rave about). I got a pretty good fit with Neve, only the wires were wide too and the gore too low.

Sadly, I struck out again with this bra. I ordered a 32G because it was on sale even though my usual size is a 30G or 30GG depending on brand. 30G can run a little small in Cleo's molded options like Maddie (which is a total fail for me). This bra's measurements gave me the impression it would be rather shallow, so I would have thought my ideal size to be a 30GG. I'm not sure how accurate the measurements here are and will be adding mine soon. Since Cleo bands run tight for me, I figured 32G would be a fair option.

Keeping those size gymnastics in mind, this bra isn't right for me. While the wires are narrower than, say, a Freya half-cup, they are far too tall. Even though they don't really poke my armpits, they are very U-shaped. The cups are deep, not shallow like I thought. Fit wise, it seems like a cross between Cleo Juna Balconnet Bra (6461) and Cleo Maddie Moulded T-shirt Bra (7201) . It is more open on top than Maddie, but more molded than Juna, yet has the same U-shaped wires as Juna. Also like Juna, this bra only has partially adjustable straps, which is probably the only reason why it's not reaching my armpits: I can't fully get it into my IMF; at least not comfortably.

The main, glaring issue with this bra and why I will not be keeping it is that the cups are super tall. There is no place to measure cup height for Bratabase, but laying a soft tape measure from the top center edge of the cup along the curve of the cup to the base of the underwire channel (not including the band), this bra has 7" tall cups. At 5'1" with high-set and short roots, yet again I find myself wishing that I could order the "petite" version of this bra with a reduced cup height. Because of the tallness, I am literally getting a wall of bra that is empty at the top. My larger side does a little better. I am getting the most emptiness nearer to the gore. The cup is jutting out more there. This is also where my tissue wants to slide the more I wear it and move around. I am not sure if this is because it is probably 1/2 a cup size too big. A cup down might quad on the larger side. Because of this severe gaping, although the gore is quite tall, it doesn't support my breasts towards the center.

The gore: it is much taller than other balconettes I've tried, more like I would expect a true half-cup to have. I have a little space between my boobs so high gores don't really bother me, but the thickness of the underwires and channels in the center irritates my chest. It tacks hard at the top and floats at the bottom of the gore. I find it uncomfortable and would have had to bend it out if I'd kept it. I always get a little floating at the bottom due to a dip in my rib area, but never had a bra so uncomfortable at the top of the gore.

Band: I have to wear the 32G on the tightest hooks, so for this bra I would say the band runs TTS if not a little long. More like a Freya 32 than what I would have thought a Cleo 32 would be like.

Size: If I were to give his bra another chance, it would have to be in a 30G. But the cups being so tall and the partially adjustable straps pretty much rule it out, anyway. Now that I think about it, with all Cleo bras, lined and unlined, I am between a 30G and 30GG and the cups are always too tall. I may have to scratch this brand off of my list even though the styles are pretty cute.

Shape: As for the shape this bra gives, it is pretty true to the type of shape I think Cleo unlined bras give when they fit: more or less uplifted and central due to the narrower wires. There appears to be adequate immediate projection at the bottom of the cup, but not a whole lot. More than, say, 30G - Curvy Kate » Starlet Moulded Bra (CK2501) , and maybe a smidge more than 30G - Cleo » Maddie Moulded Balconnet T-shirt Bra (7091) , but less than a Cleo unlined.

Appearance: I cringed when I ordered it, but truth be told, I don't hate the leopard print. I like the minimal detail of the tiny scalloped edge and no other frilly bits. The material is soft and supple. The underwires are thick and hard, true to Cleo's usual, which I don't really like that much, but wouldn't be a deal breaker if they weren't the wrong shape/height/length.

Unless someone wants to gift me a Comexim this month, I will be waiting until next season's offerings come out to make any bra purchases. My to-try list is dwindling to next to nothing while my fail list grows. I'm so tired paying too much for bras that don't fit. My post office probably refers to me as the one who returns everything, and they wouldn't be wrong.

Bonus review note: This is the first bra I ordered from Amazon that didn't arrive damaged in the mail. They padded the cups out with paper. Maybe my complaints are having an effect?

Center gore placement:
Doesn't lie flat against sternum
Underwire length:
Runs too high under the arm, it pokes
Top of the cup:
Wrinkles, can't quite fill it
Cups separation:
Too separate for my boobs
Band fit:
The band is definitely too big
Cup's width:
There is empty fabric on the sides (Cup too wide)
Center gore comfort:
Underwires dig into sternum, because they are too high
Straps adjustment:
Straps don't adjust short enough