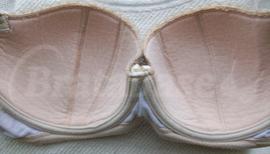 I bought this when I saw it on the listings. The CH is hard to come by anymore (yay for the new one!) and it's one of my favorite cuts, so I'll take almost anything in my cup volume. The measurements here are for the bra after alterations.

With a 28" underbust, the 75 is obviously too big of a band for me. I have since sewn it so it doesn't stretch past 28" (it's been altered in the photo with the yellow background). The band fits well on the loosest eyes with the alteration.
The straps are a bit thin, but they're not really stretchy. They're really long though and the adjusters are on my upper back. They're embroidered and adjust easily, they don't need to be fiddled with through out the day.
The wires are narrow and comfortable.
The shape is out front and moderately uplifted. This bra is older and has been through a few owners. I'm not sure if it's heavily used (I don't believe so, it's in good shape) or if it was always a soft bra, but it's a little floppy and I don't get as much lift and shaping from it as I do my other CHs. I sewed through the elastic at the top of the cup, under the arm. That holds the cup up in place better giving me more lift, but it's still soft and doesn't give me quite as much "cakes on a plate" as my other ones. The shape works well under t-shirts.
The picture with the yellow background shows the color the best, and it's still not quite right. The main material looks like a Worther's Original candy. It's a really nice caramel, and Toffik is a perfect name for it. This bra would absolutely work as a nude for me in the summer if it weren't for the trim and straps. The lighter parts show through a white t-shirt, but they work well under thin colored shirts. So, while not invisible it's still pretty versatile.

I'n quite happy with this one. I'd love to find it in my actual size of 65E, but am comfortable in this with my reversible alterations.

Update 12/22/2015: I cannot get the band on this to stay tight enough. It slides around as I wear it and the gore stabs my sternum and left breast. It would be great if I permanently shortened the band, but I am not confident enough to do so.

Update 1/23/2016: I sent this bra to another user to be altered. She took the band in by cutting off the unneeded material and reattaching the clasps. It now fits like a true 65E and I'm able to keep it. Thank you, Noob .

The band is too big as is and will be altered.

The band is too big as is and will be altered.