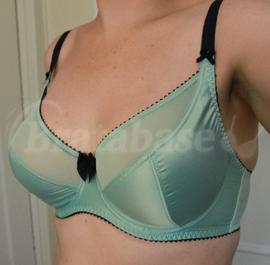 Why yes, I bought another Claudette Paramour. After the miserable failures that were the Gossard Glossies Moulded Bra (6271) and the Parfait By Affinitas Kelly Wire Bra (6702) , I'm so glad I did. It reinstated my faith in humanity and bra manufacturers. I'm convinced that this bra (at least for me) is the best bra on planet earth. It's got non-stretch lower segments in the cups and stretch mesh for the top section - ergo, supportive, and no gaping or quad-boobing at the top thanks to the stretch. Everything about it is comfortable. This is the second season this bra has been out (I bought last season's in black and garnet) and I do believe they've made some minor adjustments for the better. The shape is a tad more rounded than last season, and they tweaked the way the fabric is sewn together on the cups (last season's satin fabric shifts around a bit on top of the inner lining of the cup, whereas this season they seem to be sewn together and so give a smoother finish.)

I'm so glad that this springs colorways are light - my main complaint with the black and garnet was that they are my go-to bras, yet I can't wear them under light colored shirts. What was I supposed to do without my beloved Paramour? But now I have it in the seafoam colorway (which features navy blue accents on the bow, straps, and elastic) and now I can seriously wear it under anything. I'm also considering nabbing the light pink as well. Because, at this point, I'm basically fazing out all my other bras and stocking up on Paramours.