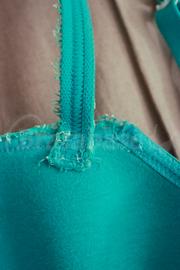 This bra is beautiful. I keep wanting to call it "Jasmin" instead of "Maia" because it is the exact shade turquoise that princess Jasmin wears in Aladdin. That, and the filigree lace pattern with its hints of yellow embellishment remind me of the patterned walls in her courtyard. So, obviously, it is awesome for that reason, but also because even without those references I love the style and details. It's a nice balconette cup with a line that pretty much runs straight across, and doesn't give a distracting amount of cleavage.

One thing to point out: The band on this bra has virtually no stretch. It fits me, but there's not a whole lot of give beyond that. If it had more stretch it would probably be more comfortable, but as is it's not a huge issue.

And another thing: when I first received this bra, I had some issues with the fit. Like nearly all my bras, the straps were set too wide, to the point where they essential started in my armpits. HOWEVER, this time I took it upon myself to shift the straps about 1 inch each towards the front, and made it work! The way that the straps meet the cups on this bra meant that it wouldn't be too hard to detach them and it wouldn't look too strange having been relocated. You can sort of see on the cups the point where the straps used to attach, but that's basically in my armpit and not super noticeable. This modification made the bra totally wearable! Now I can enjoy its looks AND its fit.