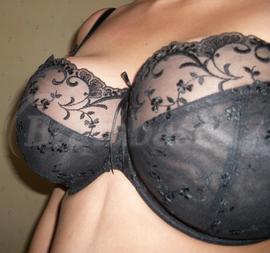 The bra that fits me best so far, I think I finally figured out my real size as 32J: no spillage, whole boob is inside the cup, wearing the new bra on the loosest hooks.

However, the center gore is either too wide/ too high for my close set boobs. So much so that after wearing it for a few hours, the right underwire naturally migrates on my right boob (the smallest) and only the left underwire is left between my breasts. And there's clearly no room for more than one there. Even altering the bra and tucking in the center gore (which is pretty wide) doesn't solve the issue. As a result I end up with angry red lines on my belly from where the underwire has been pushed away from my chest and down.

The shape is pretty nice, overall round but with a squarish/flat look if one looks closely. The seam between the lower half of the cup and the mesh seems to be digging into my boob somewhat. But my breasts are not very dense at this place, so it might not be a flaw of the bra itself. It doesn't show anyway when I'm wearing a top.
No quadraboob effect though!

Center gore placement:
Doesn't lie flat against sternum
Top of the cup:
Wrinkles, can't quite fill it
Cups separation:
Too separate for my boobs
Strap separation:
Not a problem