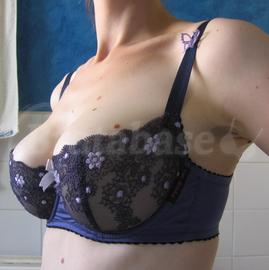 HM Granatowy Motyl in 65E was my first EM bra. I bought it because of it's beautiful and delicate design. When I lost on weight, it became far too big in cups and lately I decided to find my first effuniak in my actual size. Happily, I have found it on balkonetka.
The paricularity of this bra, is that the previous owner has changed the straps. There were two sort of straps in the original version: the first one were violet and wide, some users complained that they were itchy. The second type of straps were fully adjustable blue ones, with a violet ribbon in the front part. Theses straps were extremely strechy and I had to reajust them several times a day.
My new straps are blue, wide and wery comfortable, much more than the original ones. As the straps constitue a part of the band in the back, the band is much more stable now. The original band in this model is very strechy.
Concerning the cups, they run normal for the HM style which means that I had to go down one cup size (I wear 65e in padded styles). The cups are a little bit smaller than in other HMs though.
The center gore is very high, like in others HMs, which is sometimes unconfortable at the end of the day.