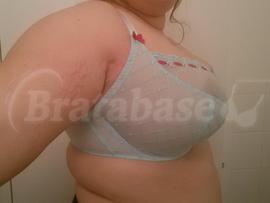 I got this in the seafoam and pink colourway, which is really ohhhh so cute on. Unfortunately though, it was a miss. This was my first try with curvy kate unpadded in anything resembling my size, and we had issues.


The front view is pretty good looking as far as I can tell, but once I turn sideways it's that pointy in an odd way shape CK can give. I appreciate that the center gore is, if not low, much lower than I've been used to with superbras.

The wires, though, seem to be both too short and too narrow for me, especially in the bottom, which runs sorta counter to what I've read elsewhere. I'm definitely getting Orange in a glass, and not filling the bottoms of the cups. I'm not sure if sizing up would help, and might put up a fit request later.
On the plus side, the cups of this bra felt SO SOFT to me, just fingering the material. My main point of comparison is Panache's mesh, and this feels way way nicer to me. The band is also hugging my back much more nicely, without the tendency to curl panache has had, though I can't say how it holds up over time since I won't be keeping this.

EDIT: When I took it off at the end of the day, there were weird little puckered holes in the mesh part of the band near the cup. I'm not sure if they were there before I put the bra on and I didn't notice them, or if they happened in one day's wear, but either way they seem like a serious quality issue. I've worn much tighter bands without anything like this, and this was probably the least noticeable band while wearing I've had in a while.