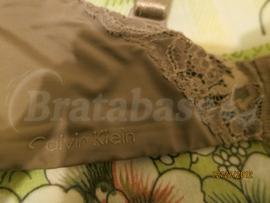 For reference, this bra is my mother's and her underbust is 29.5 whilst her overbust is 34.3 (Just convinced her to let me measure her lol)

Anyways, this is definitely her favourite bra that she owns, but I can tell that the cups are not wide enough for her (She has a little armpit fat going on) and it looks too deep (gaping on the top)

It's kind of stretchy.. she's had it for a while now but it has great detailing that makes it very pretty.

I think the band looks good on her. She likes that it's tighter than all the 36's and 34's she's been wearing before. The 32 band accounts for days when she's more bloated but... We tried putting her in a smaller band before (30) ... and she ended up having horrid back cleavage... so no idea what's going on there.