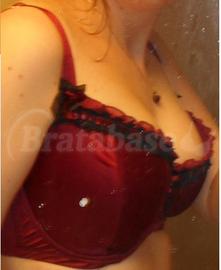 For me this bra, and well, almost all Curvy Kate Showgirl bras, is too large in the band. Everyone I've heard needs to size down a bandsize (and up at least a cup) in the Thrill me, but since there are no 26HH I'll have to do with this.

However, it does fit proberly on the tightest hooks when it's new and I will alter it as soon as possible. I still find it good enough to be worth the money as I bought it on sale. All my comments will be based on the fit new with hooks on the closest set of eyes. I will update this after the alterations.

When it comes to the Thrill Mehttps://d28qt14g3opchh.cloudfront.net/smileys/icon_confused.gif" alt=":s" /> you really have to be careful. There are bras out from several seasons and the fit differs a lot. This one (wine/navy) fitted me perfectly in the cups, but the ivory/black one is a cup size larger, even though it looks the same otherwise.

In this one the support is great. Of course, with a half cup bra you can't expect the same support as with a full cup one but still it's great. The cup isn't moulded but padded and keeps it's shape even off. The satin cups look faboulous and the colour might be more red than I thought but I still love it.

The wires go quite high in the front, which may be an issue for some. For me it usually stops hurting after some wearing. The straps sits quite far apart in the front, almost too far apart for me. This does however help with the shape and could also be a bit less wide if wearing the correct size.

It gives cleavage. The amount is probably determined by the boob shape and the size, but for me, who usually don't get huge amount of cleavage I think it's just right. Since it's so low cut you can usually choose size based on how much oumph you want, but I suggest go with a cup size larger and a band size smaller than your usual Curvy Kate unpadded-bra size, if it is the wine/navy one you're looking for.

Cons:
-Band size one size larger than usual
-Unconsistent cup sizing between different colours
-Many changes in the model
-Straps positions a bit too far out on the shoulders.

Strap separation:
Not a problem
Straps adjustment:
Straps don't adjust short enough
Top of the cup:
Cuts into breast tissue (quad boob effect)
Band fit:
The back of the bra is not at the same level as the front (rides up)

Center gore placement:
Doesn't lie flat against sternum
Cups separation:
Too separate for my boobs
Band fit:
The back of the bra is not at the same level as the front (rides up)
Strap separation:
Not a problem

Strap separation:
Are too far apart
Band fit:
The back of the bra is not at the same level as the front (rides up)

Strap separation:
Not a problem
Band fit:
The back of the bra is not at the same level as the front (rides up)