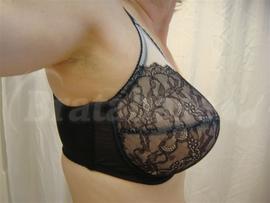 This and another Wacoal are new bras for me. I purchased them at Bella Intimates in Rye, NH. For both bras (I'll enter the other later, I don't know what it is right now), the wires seem thicker and stiffer than other bras I've recently bought or tried. Also, they seem to be more of a deep U shape with the tops of the U aligned, while other bras I've tried recently are more of a wider U and the tops are not necessarily at the same height. This one seems to be like the other where the tip of the wire under the arm presses into my body a bit more than I'd like. I was able to wear the other bra all day, though it left a red mark in that spot on each side. I think this one will be the same.

This one is snugger than the other Wacoal, and Shelley at the shop said it is some sort of fabric (I forget what sort) that will ease after some wear. It's comfortable enough on the loosest hook, though we'll see how the day goes. It was hard to measure this bra unstretched as the band curves a lot. The 24 inch unstretched measure was sort of the midpoint. It stretches out much more "flat", so it's easier to see where the measure begins and ends. You can see that in one of the detail pics. Both ends are like this.

Today is my first day wearing it. I will DEFINITELY be snipping the tag out of this bra, it is irritating. I used to wear another Wacoal (in the wrong size) and always snipped the tags on those too. Seems to be a different material than, say, the Fantasie bras.

The bra itself is pretty enough, but not "cute". It provides somewhat more forward projection than others I've had recently.