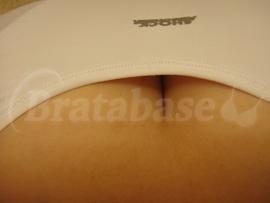 Also, this bra produced a total uniboob effect, which I'm not fond of. And more than that, while I was in the bra, I found that my breasts were touching each other for a fair amount of their projection... I would think this would be really awful while getting sweaty.

I'll be sending this one back and likely not ordering another. I think I now know that I want an encapsulation type sports bra, and I don't think this one is it!