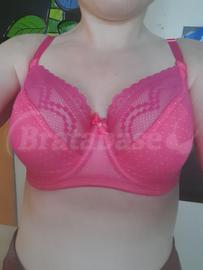 I am happy I finally got to try this Cleo Hettie Balconnet Bra https://d28qt14g3opchh.cloudfront.net/smileys/icon_smile.gif" alt=":)" /> I had the oppertunty to get this one in a 28FF for a very fair price, so even though I had a feeling it would be an imperfect fit on me due to the Gore, So many people refer to this bra in my size range that I wanted to know how it fit me for reference and help assessing shape/fullness because my breast shape has changed with weight loss.

I got this bra in pink, I prefer a softer more dekicare pink personally, this brighter darker pink seems a bit more Youthful than my taste but that's okay. At a glance the construction of this bra reminds me of one of my prior Victoria Secret very sexy Balconett bras. That previous VS balconett was always top large in the band, but the cups were more ideal for me when I had more overall volume and upperfullness.
Now that I have lost weight I have lost both size and volume all over and the upper part of my breast has softer and less firm tissue. (Depending what time of the month it is or weight changes, the area fluctuates some and may deflate or firm up a bit) I had a feeling this bra would have a bit too much upperfullness for me currently, which seemed to kind of ring true. I did somewhat like the stretch lace that made up the top quadrant of the cups. My nipples are spaced kind of far apart on my breasts, so I always have at least some centerfullness. I was very very center/innerfull before I lost weight, and possibly even as far as FOB FOT. The gore would gave been too tall and not close set enough for me before, but otherwise previously this bra would have been good before. Currently the gore is not the most ideal but I can tolerate it, but gore's can still push my projected soft tissue in weird directions in some instances. The slightly stretchy lace connects near the gore. Which is good because that's often where bras don't have enough rooms but I also feel like I need more support right there too than that material allows. I also think that this cup would jabe been preferable to me slightly shorter and closer to a half cup, which I show in one of my pictures. The cup width is decent, the wires pretty much narrow enough (I Am assymetrical and still trying to find my most ideal cup width between 5 and 6inches for both breasts. The band is firm enough but I may have worn it on the middle or tightest Hooks (it's a pre owned bra though so likely has stretched a little with wash and wear)

This is a great bra for many. The fit was imperfect, mostly with the gore but also with other subtle parts. Size wise is a close fit, I think the 28FF is good for me in the padded Cleos but I think 28F is best for similar unlined bras of this brand. (My 28E is still too small) This bra feels better quality than my past VS balconett bra that it reminded me of, but I will admit I liked the "look" of the black lacy VS balconett better. I don't always adore the youthful bright colors that Cleo bras can sport. This bra may not be close enough to wear but I don't regret buying it for diagnostic purposes. In may end up trading it on here in the near future.

On May 2022 View measurements