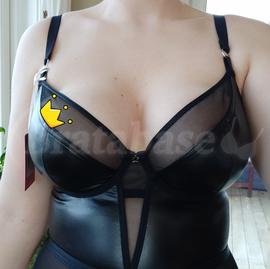 TDLR: Very poor fit. Looked fantastic, would never wear it. I ordered and sent this back in April/May and at time of writing it's October, so this review is to the best of my memory. I'm just under the cusp for EU "plus size" sizes (plus size in quotation marks because clothing sizes aren't consistent and plus size isn't a universally same size range) so for me this body was much too tight around the waist and midriff, while fine over the hips and in the gusset. I'm 169cm tall and wear 44/46 in underwear and 38/40 in shirts.

QUALITY: OK. It wasn't quite poor, but it was not the standard I expect from a UK lingerie brand. Not all the seams are even and I'm trying my hardest to picture it since I didn't take a picture of it when I had the body - The elastic edge of the band wasn't evenly sewed on below the underwires, so the top of the elastic could peek out just below the underwire, instead of being snugly sewn under the wire channels. The bra band was constructed separately from the rest of the bodysuit and sew in.
The fabric choices were interesting - the plain black mesh they used was really stretchy, but the vinyl has barely any stretch to it at all. This was made clear when i put it on and fastened the hooks in the gusset. The top half was vinyl and the bottom half was stretch mesh.

FIT: This was such a poor fit for me. It was so uncomfortable, the wires dug into my ribs, the seams were digging into my sides, the whole thing didn't feel like it was made for my body's proportions. It was straight up painful to wear.
The top half of vinyl was so tight that the seams were being pressed into my skin that they hurt, in addition to leaving angry red marks. The wings of the bra were also vinyl so the bra is very non-stretchy for the sides and front half, and then the black mesh on the back is way more stretchy. This makes for uneven distribution of fabric tension, making the front much tighter than the back, and thereby making the tension on the wires higher and making them dig in to my ribs. The wires sat lower than my underbust line anyway because of the cup shape and lack of immediate projection.
According to my notes the band was still correct tightness for being 30FF, but you wouldn't know because the wires hurt so much lmao.
My natural waist is about the same circumference as my underbust, and the body was too tight for that part of my body. Again the vinyl in the front and the mesh in the back made the front part disproportionately tighter than the back part.

It felt like the cups wanted more outward tension than inward tension - the wires were really wide for me and it was lacking so much lift and space in the front and center cup structure that I had to scoop and swoop my boobs towards my armpits to actually fit them in the cups. If I were to scoop them where I normally would scoop them to wear a Gorsenia bra, they would be chillin' halfway-in-halfway-halfway-out of the cups, making a strange quadboob effect. A massive shape mismatch in other words.

DESIGN:
This body was really pretty and it looked SO GOOD on the models (especially The Lingerie Princess who I follow on instagram), so I bought it because I wanted to look as good https://d28qt14g3opchh.cloudfront.net/smileys/icon_razz.gif" alt=":P" />
The half/half vinyl/mesh cup structure looks awesome. Like that part was easily the most good looking part of the entire thing. I can appreciate the dart of mesh between the two halves of vinyl that go across the waist/midriff, it gives the shape variation and clean lines to make it less monotonous. The charm at the gore is cute, a little star to compliment the name of the body "Lucky Star".
The strap attachment point to the cup is stylish, being made up of a metal hoop attatched to a ribbon (more solid than one, but it looks like a ribbon) sewn into the cup. I'm not fond of it for fit purposes because it feels less sturdy, but it looks cool, I can't deny that!
There was 3 rows of 3 hooks in the gusset, which is excellent for adjustability. I'm glad it has so many hooks to adjust with because it makes more room for different body shapes and needs.

On May 2021 View measurements