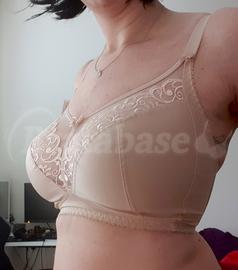 Libi is one impressive little thing! If you are looking for a wireless bra, you fit in their size range, and you don't mind a slightly looser band, Libi by Ava is your bra!
I like this bra more than XS - Cake Lingerie » Sugar Candy Seamless Everyday Bra (28-8005 (post surgery), more than 70I - Kris Line » Afrodyta Soft No Wire and definitely more than the Ahh bra (and its various knockoffs I have). I think this bra will see some serious wear from me.
Additionally, they make a sports bra in the same cut and now I'm seriously considering getting it, no wire and all.

Now the hard truth is that in 65J it is too large in the cup for me. But I 100% think the 65I would be too small, and I'm not willing to risk the money (or the comfort, tbh). If I could find this in black in 65J I would be purchasing it immediately because I expect it will run a teensy tiny bit smaller, and so it will be juuuuuust right.

The construction of this bra is really something. I think the reason it feels (and looks) so supportive is the cup construction (4 parts, one vertical, another horizontal and then a side support longer seam), but there is another thing that really affects the comfort - it has side boning and I find that this is what makes the band so nice! The boning is not pokey, but it's very sturdy, and because of this, the band does not roll and rope up as is the case with A LOT of wireless bras for me.
I do want to acknowledge an issue that I see in the photos but did not see or feel while wearing it. The cups are sorta sliding down as if there is not room for my boobs under there, or maybe because it is slightly too large. However, I am 99% sure this is an issue that could be remedied by shortening the straps. As a creature of habit (and with how I usually have to deal with too short straps) I loosened them all the way--and surprisingly they are very long! Thus the straps are actually giving me no support in these photos, it's all the cups and the band. I felt zero pull on my shoulders.
The shape is the roundest shape I've ever gotten in an unlined wireless bra. There is NO torpedo boobs which I actually found incredibly surprising, but I guess with the side panel in the cups it makes sense.

Another thing is that even though the lace on top is not stretchy, the whole trim has some give and I think it wouldn't cut in too badly for someone a little fuller on top than me. I usually have an issue with this but I guess since the bra is slightly too large, it is not an issue with this one.

The band is loose. In this colourway, it's more of a 70 band (it stretches out to 82-83cm). It has a slightly raised center that I guess should act as a gore, but I will say I don't think it quite does. However, there is very good separation for something that has no gore! My boobs are only slightly touching at the tops.

The bra aesthetics I like as well. It is a very pretty bra, the lace doesn't feel cheap (none of the materials do, actually) and it's absolutely beautiful. I will say tho (as is demonstrated in my very wrinkled, but the one I knew 100% would show it) the lace and all the seams are very visible under clothing. No big deal for me, though, if there is anyone out there offended by my seams they can just look elsewhere.
The seam in the middle features a cute little bow and pearl https://d28qt14g3opchh.cloudfront.net/smileys/icon_smile.gif" alt=":)" /> Come to think of it, this bra reminds me a lot of EM's 70G - Ewa Michalak » Bm Bibi Beżowa Perła (533) with just slightly different lace.

Well, I think that's all I wanted to say. Overall, pretty, functional, supportive and most of all, comfortable bra! And it is very cheap, too! Anyways, onto trying to find the black one in 65J!

edit: I added an angled photo with straps tighter and the bra hooked on the tightest hookset, however I don't mind wearing this on the loosest as it doesn't seem to ride up at all. There is a slight difference, but the shorter straps do make the cups taller and I don't think petite ladies would like the way the straps and outer cups cut into the tail of spence.

edit 2: I also have no idea why btb is displaying my whole review without the 'read more' tag. Sorry everyone.