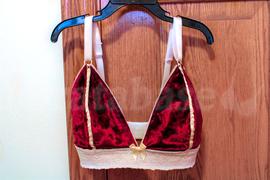 This bra's measurements have been altered
Altered band, Band was cut to be 18" unstretched instead of the recommended 21" for a 26 band.

This is a self-made bralette created from a pattern; it is not commercially manufactured. However, I am making an entry for it since it might help others to know information about the pattern, and it's helpful to me to have all my bras documented on Bratabase.

This pattern is really beginner-friendly so it was a great first self-made bra for me, seeing as it's only my fourth ever sewing project. It only has 2 pattern pieces and all the instructions are pretty straightforward, especially with the video tutorial. I got a kit for making this bra with wine-colored crush velvet and white findings, and the availability of kits makes it even more beginner-friendly since you don't have to worry about supplies.

My main reason for wanting to learn bra-making is because of my downright impossible to buy size and shape (26FF and NOT narrow-rooted), so I was drawn to this pattern after some searching because it was the only one that flat out lists 26FF in its size chart. I really appreciate being included in its range, it honestly does mean a lot to me at this point. In 26 bands the official range is UK sizes D-FF, but all the cups are the same for sister sizes so you could theoretically make, say, 26G by taking the pattern pieces for a 28FF, but there's one constraint that I'll mention in a bit. Here is an image of the full range: https://cdn.shopify.com/s/files/1/2715/5310/files/Screen_Shot_2019-03-09_at_8.11.14_AM_large.png?v=1552137109

The recommended unstretched band length for a 26 band was 21 inches, but I didn't find this to be supportive enough for me and having a band that is able to start off on the loosest hooks is a goal that's important to me. I ended up cutting a 17 inch band, which I found comfortably snug, and ran into a problem: the cups were very large in comparison to the band and their combined width was very nearly the same width as the whole band. This meant that there was almost no space to sew on the straps or the closures and the cups would stretch out very wide and shallow when I put on the bralette. I extended the band by just sewing on an additional piece that was about an inch long and I was able to complete the bra, albeit maybe in a bit of a different shape than intended. Including hooks and eyes, the unstretched band is around 21" before the effects of stretching out over time, but keep in mind that this is not what I cut—the final length of just the band elastic on its own was 18". Another measurement clarification is that the band itself is 1 3/8" wide, but I have it documented as 1 1/2 because I added a lace trim that makes it slightly wider.

Because of the issue of the cups becoming overwhelmingly large in comparison to the band, I think it makes sense to cap off the range at FF to allow a reasonable amount of space in the back. If I made a band that was any smaller or cups that were any larger, it wouldn't have really worked and I would've had to compromise with either a looser band or smaller cups. For anyone that wants to make a small band + large cup bralette, it might help to be aware of this potential issue in advance. I don't blame it on the pattern, I suppose it makes sense that this would be a challenge for these types of sizes. However, it does mean that this particular attempt doesn't fit 100% since it does not contain all of my tissue. I compensated by adding a small "fence" in the middle.

I'm still very new to sewing so my result has unprofessional stitching but I'm very happy with it anyway! It's hard to comment on quality/comfort/appearance for something that depends on the individual maker's skill, but I will say that the pattern and its instructions seem well-made, the wide band is very comfortable, and it's easy to customize the appearance. It comes in 3 styles—lace overlay, all fabric, and foam—so it's a versatile pattern. I went for a wine red/white/cream palette and added ribbons over the seams of the cups, a gore bow, and stretch lace over the band (these weren't included in the kit, I got them separately). Overall, it's a nice pattern and I hope to continue to use it!